Relief…Relief, release and relaxation are only some of the few words I can think of describing the treatment I received at StrechingSA Moreletapark. At the beginning of 2017, I would some mornings wake up with pins and needles in my right hand, sometimes three mornings in a row and sometimes even fort he whole week! At first I ignored this, thinking I was just sleeping wrong and causing my arm to go to sleep. But when it started to happen more and more I got worried and went to see a doctor, as the pins and needles started to develop into pain later in the year. Although the doctor was able to treat the symptoms the problem never really was solved and the cause of the problem not found. A few months passed and I started working more physically at work which resulted in my arm and hand getting worse. I would experience immense pain in the mornings, waking up in the mornings with my whole hand dead trying to get rid of the pain. Painkillers only helped a little and the pain just never went away and would just increase daily. I heard about StrechingSA amongst friends and family, and being desperate after trying numerous treatments and medication I went to see Ryno van den Berg. Just after the assessment I already felt released and knew I’ve finally came to the right place! In the assessment, he told me exactly what the cause was and how we are going to resolve the problem. I cannot thank Ryno enough for the past few weeks and the sessions I had with him. After each session ,I was amazed on his knowledge about the body and the effects his treatment had on my body. The pain was gone after three sessions with him and the pins and needles have faded. Finally I found a treatment method where the cause is the focus and the problem can be solved!
2018-07-30T20:07:40+02:00 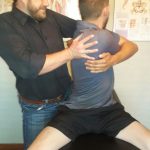 Relief…Relief, release and relaxation are only some of the few words I can think of describing the treatment I received at StrechingSA Moreletapark.
https://www.stretchingsa.co.za/testimonials/armin-cilliers/